Seems like this fall has lots of big news about little tank cars...
I received my Resin Car Works Type 27 7,000 and 8,000-gallon Acid tank car in yesterday's mail, and look forward to building it this weekend. I'll be sure to post some photos of the build on this blog.
In the meantime, RCW is gearing up to ship kits. Kits will be available direct from the manufacturer's web site (resincarworks.com) in early December - shipping date is dependent on when the photo etched parts arrive. RCW will accept PayPal or payment by check with a printable order form.

Here's the flyer showing the roadnames that will be offered in the first run of kits: 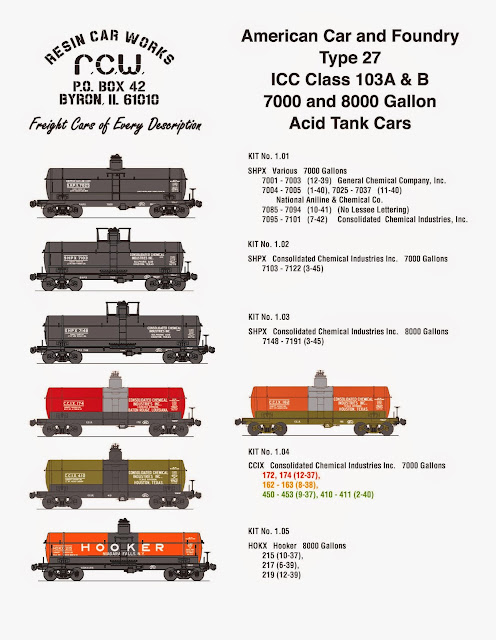 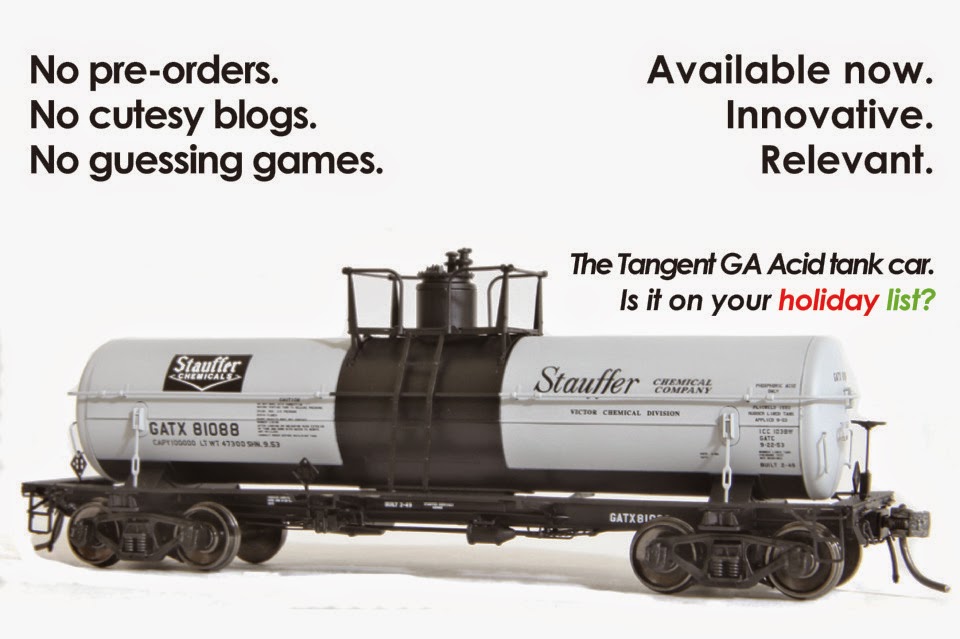 I mentioned at Naperville there were rumblings about a couple of new steam era freight cars that "maybe" would be announced around the time of Trainfest in Milwaukee.
Awoke to find this posted this morning - Marty


The Tangent Scale Models General American 8,000 gallon acid tank car is a visually-distinctive model that includes details accurate for each paint scheme.  Note the distinctive small expansion dome at the top, surrounded by a beautifully-rendered “see-through” safety walkway.  Our walkways along the side of the car are also “see-through” safety tread, just like their prototypes.  As always, our correct “true-to-life” colors and “hyper-accurate” lettering includes exact fonts and lettering placement.  Finally, our scale replicas operate as well as they look, equipped with free-rolling all-metal wheels and Kadee® scale couplers, meaning our models are truly ready to run.
This is NOT a pre-order announcement.  Our NEW Ready to Run replicas are available NOW at www.tangentscalemodels.com and we are selling these at Trainfest in Milwaukee on November 8-9.  Whether wearing “plain” GATX lease colors or the colors of a lessee, these replicas will certainly be eye-catchers on your layout!  Our first stunning release includes four paint schemes:
GATX “Black Lease 1952+” in the plain “black lease 1952+” scheme.  This GATX black lease scheme represents a general lease car in service beginning in 1952 and is broadly applicable across North America.  It is available in four road numbers.
GATX “Stauffer Chemical Company” in the distinctive gray and black scheme with a 1953 paint date and 1949 build date, complete with the Stauffer diamond logo and Victor Chemical Division lettering, just like the prototype car.  These stunning cars are available in four road numbers.
GATX “The D O W Chemical Company” in the black scheme with striking yellow graphics including “Freeport Texas” lettering.  These nationwide service cars include a 1953 paint date on the side of the car.  This GATX lease scheme is available in four road numbers.
GATX "White Lease 1971+” in the striking “white lease 1971+” scheme which includes a large black stripe in the middle of the car.  These cars were repainted in 1971, which of course is modeled after an exact prototype photo.  These cars lasted in service into the 1990s, and are available in four road numbers.
Undecorated RTR Black 1949-1951 cars are immediately ready for decaling!
Undecorated RTR Black 1951-1960 cars are immediately ready for decaling!
Undecorated Unpainted Kits are available as well for those who desire to build their own.


Pricing for RTR models is $44.95.  High-resolution images showing these fine replicas are available at www.tangentscalemodels.com  and our site also includes prototype images for your reference as well."
Posted by CVSNE at 9:02 AM No comments: